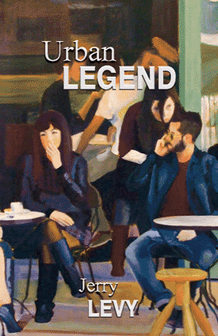 Urban Legend, a street-smart and contemporary collection, is comprised of gritty, urban tales about troubled individuals attempting to mitigate loss by searching for their own personal antidote. These city-centric stories encompass a wide variety of cultures, characters from varying social strata, and earnest examinations of how individuals react when forced out of their comfort zone.In “Paris is a Woman”, we meet a man hoping that by escaping to liberating Paris, he will heal his uncontrollable emotions; however, he soon finds that it is not that easy to run away from your own heart and mind. “The Golem of New York” features personal devastation that leads to utter desperation and fascinating esoteric experimentation. In “Stolen Words”, the protagonist uncovers a trove of unpublished literary works that he hopes will result in fame and stolen fortune. “Phoenix Rising” introduces a deeply-troubled sculptress and a cat that manages to prevent her suicide and subsequently bestow instant noteriety upon her. Jerry Levy’s smart and clear stories are driven by well-paced action and an inherent gift for capturing the aggressive vigour of people in the midst of serious emotional upheaval. Urban Legend is filled with predominantly tough-minded and arresting prose but Levy’s writing also provides moments of eloquence and grace. His depiction of place is vivid and lends a realism and clarity to the collection. Levy’s relentless pursuit to delve inside the minds of his characters gives these stories a psychologically intense, compelling edge which, in addition to the emotional depth created by the inclusion of a wealth of personal details, raises Levy’s characters from the page and places them firmly in the mind of the reader.
_____________________________________________________________________________________________

Now that my book is in print, I’ve had a few people ask me whether there’s an overriding theme to it. Anything that links the stories together. And it’s a good question. I mean, after I signed the book deal with Thistledown Press, they asked me the same thing. They needed it for promotional purposes. And it’s funny because on the face of it, when you read the stories, you might not think there is any overriding theme. The stories seem quite different from one another. But, you know, when your publisher asks, you have to come up with something! Pretty fast too. So I started going through the collection and I noticed that yes, maybe there is one theme that connects them all. The notion of ‘loss.’ The loss of a spouse, loss of integrity, loss of dreams, loss of identity… and the rather strange ways that people try to deal with those losses.

Actually, Ann Ireland, a wonderful Canadian writer, wrote a blurb for the back cover and here’s what she said:

In their off-kilter quest for money, love or fame, Levy's misfit narrators plunge into dark situations of their own making. Bleakly comic, these tales engage as well as provoke.

So that sounds about right.

The very first of the stories to appear in print was ‘In Africa She Ly Down to Sleep with the Lions.’ That occurred in 2005 in Acta Victoriana, the University of Toronto’s prestigious literary magazine. After that, 9 more stories appeared in print. And then in 2012, I got the book deal. So it was no overnight success, rather the result of years of hard work. Oh, and I should mention that of the 10 stories in the book that were published, I was paid for 3 of them - $24, $36, $100…no big windfall! Still, it was like winning the lotto. Imagine, getting paid to write.

‘Urban Legend: Stories’ is available at Indigo, and various independent bookstores, such as Book City in Toronto. The book can also be ordered directly from Thistledown.

1) Echoes: A man’s unhinged university girlfriend turns up in his life years later and creates havoc.

2) The Golem of New York City: When a devastating event befalls a Jewish man, he enlists the aid of a rabbi schooled in Kaballah to help him.

3) Morgellons: An aspiring writer takes a strange job, posing as a patient with a debilitating illness.

4) The Anarchist: A woman whose world revolves around mayhem finds her life changing when she happens upon an unusual find in a ravine.

5) The Ugly Man: Labelled an outcast because of severe facial deformities, a young man hitches a ride to Northern Ontario where he gets a job as a tree planter.

6) Paris is a Woman: A banker gives up his middle-class trappings in Toronto to live a bohemian life in Paris.

7) Urban Legend: Unable to find work with her liberal arts degree, a woman decides upon a most unorthodox occupation.

8) Stolen Words: Called to clean up the apartment of a woman he barely knew, a man discovers a treasure trove of unpublished literary works that he hopes will send him on the road to fame.

9) The Scarf: Down on his luck, a man with high aesthetic values steals an expensive scarf from a law firm and sets out to find the owner.

10) In Africa She Lay Down to Sleep with the Lions: A woman slowly drives her manipulating boyfriend mad.

11) Phoenix Rising: A sculptress becomes a hero when she risks her life to save an animal.

12) Dear Santa: An elderly man takes a job answering letters addressed to Santa and gets personally involved with one of the letter-writers.

13) The Wiz: An intelligent woman slides headlong towards oblivion until she meets the man of her dreams.

14) The Doppelganger: A man is certain a double is infiltrating his life and takes desperate measures to put an end to this debauchery.